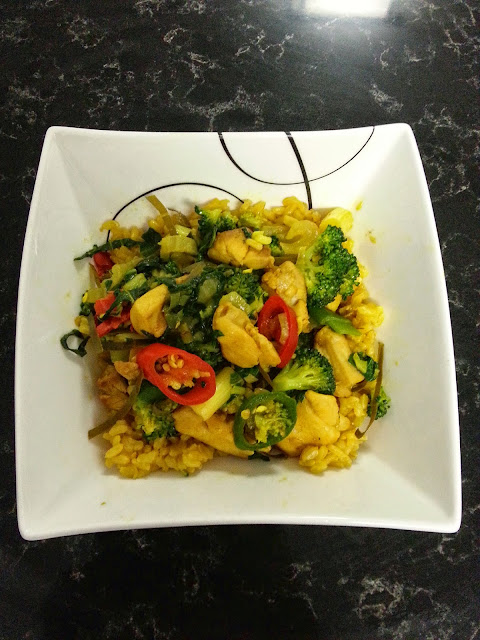 While in Melbourne, we went to the Cookie restaurant and beer hall on a recommendation from a good friend.  I can tell you that it did not disappoint.  The atmosphere was electric and the food and drinks were divine.  I had the chicken and corn dumplings in thai green curry, while the Dragon had the stir fried turmeric chicken, wild ginger, kaffir lime and holy basil meal.  Both were delicious.  I decided to try my hand at making a meal similar to the Dragon's, as it is the healthier of the two options.  This is not a copycat recipe (trying to exactly replicate a meal) per se, as I have changed some of the vegetables to suit my own taste, but I think it will taste great nonetheless.  Turmeric has anti-inflammatory properties, is good for heart health and I've heard rumours that it may also have some benefits for the skin - don't quote me on this though, it is all based on pseudo-science ;)

Change up the veggies to whatever you like to eat. I usually use bok choy in stir fries because it has both a crunchy component and green leafy goodness.  I was aiming for maximum veg.  Use real grated ginger from a ginger root, which you could combine in the mortar and pestle.  I just use minced ginger from a jar at present, so I can't give you the amount of ginger root to use.  In time I'd like to progress to real ginger root.  Serve on soba or other noodles rather than rice, or on brown rice if you are being uber healthy.  We had run out of basmati against my knowledge so we used brown rice.

Beautiful.  The dragon thought that the flavour profile was even better than the restaurant meal, but that is subjective.  We used a different ratio of vegetables to chicken.  We were going for higher vegetable content, while theirs was heavier on the chicken.  They also used green beans, while we used bok choy, shallots and broccoli instead.  This had a different flavour profile than what we usually cook, so both cooking and eating were fun.  Often stir fries do not reheat well, so we were happy that it actually reheated fine the next night.

Have you used these kind of flavours before?  If so, what did you do?