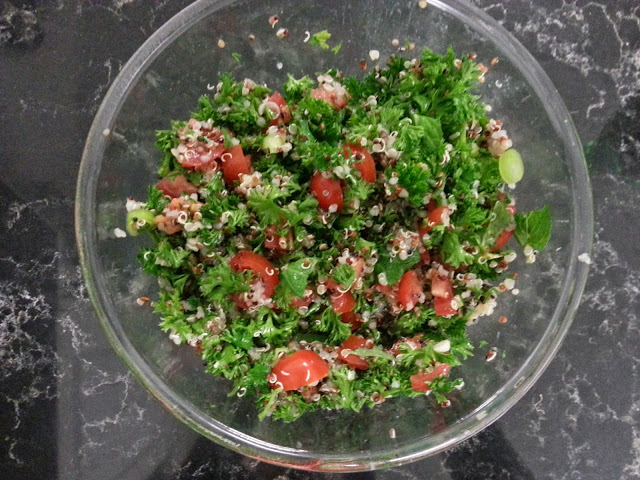 Tabouleh is a traditional Levenite vegetarian grain, herb, onion and tomato salad.  Ratios of herbs to grains varies, with traditional Lebanese tabbouleh having more greens and less grains than what we often see here in Australian made versions of the dish.

It is incredibly healthy and just bursting with nutrients.  It is high in fibre, and contains good amounts of Vitamin C, iron, magnezium and zinc. I'm sure that there are other goodies in there too, but (not being a dietician/nutritionist) that's all I'm aware of.

Tabouleh is commonly served as an appetiser, part of a mezze (Middle Eastern tappas), as a salad, as a dip or served in a lettuce leaf.  We often see it as potential ingredients in kebab stores, and it can taste lovely as a component of a wrap for lunch.  I elected to use quinoa rather than the traditional burghul, given that I already had some in the pantry.  I'm all for using up what you already have if possible, rather than shopping for more.  Quinoa also provides a gluten free alternative.  If you want to be more traditional, stick with burghul.  While using quinoa rather than burghul, I tried to be a bit more traditional by making the herbs and tomato the primary ingredients, with the quinoia taking more of a backseat.

The main spin on this side is using burghul instead of quinoa, which is more traditional.  Burghul is cookeds differently, however.  You place the burghul in a heatproof bowl, cover with boiling water, seal with alfoil, and leave for 15 minutes.  Then use a fork to fluff the cooked burghul.  Alternatively (and very non traditionally) you could use couscous for something different.
Other variations include using diced roma or bush tomatoes instead of perinos, using red onion instead of spring onion, including diced cucumber and changing the ratio of herbs to other ingredients.
Some add spices such as cinnamon, all spice, black pepper, ground cloves, ground nutmeg nd/or fenugreek.   I'm leaving the spices out of mine and sticking to simple lemon juice, salt, pepper and the natural goodness of the other ingredients.

I had this on Middle Eastern Lamb Mince and it was just lovely. I had heaps left over as well, which I can use as a side to other meals or in my lunches. I think next time I will use continental parsley instead of the bushy stuff as something different.
Posted by Bunny at 22:18