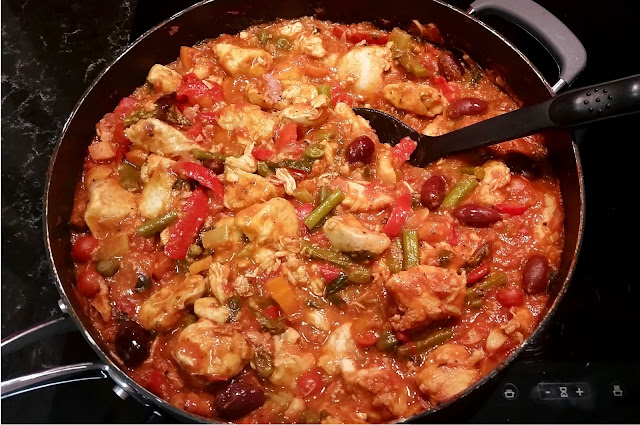 When I was a kid, chicken cacciatore was a common family dinner and I loved it.  It consisted of cooked chicken in a jar of pre-made sauce on rice.  It was an easy meal for my busy Mum to throw together mid-week for her picky kids (well to be honest I was the picky one, my brother was the easy kid).  Recently I started craving it again after many years, but I wanted to make a more authentic version of this Italian nomfest.  After cooking from scratch for the past few years, I just can't go back to sauce from a jar - it just tastes like preservatives, sugar and salt to me.  I've gone and spoiled myself.

Traditionally, Cacciatore means Hunters Stew.  It can be made from chicken, bunny (eep!), pork, pheasant or any other white meat and refers to cooking how a hunter would.  Traditionally the whole carcass would be chopped up and used, however while I wanted to do this semi traditionally, I couldn't be bothered going to quite that level of authenticity.  I have just used four large lean chicken breasts.  It has been argued that Cacciatore is the Italian version of the French Poulet Chasseur, but I personally love the Italian style.

The base ingredients are: white meat, onion, capsicum, garlic, white wine (Northern Italian style) or red wine (Southern Italian Style) and herbs. In my opinion most Italian and French food is better when started with a mirepoix, so I have added celery and carrots to the onion base. A lot of recipes will include mushrooms (which a hunter could easily gather from the forest) but I hate them  so you won't find any mushrooms here.  Rosemary and other woodsy herbs are also more traditional, but I was keen to harvest some of our basil so I opted for this instead.  The other non traditional addition was asparagus, just because I love it so much and couldn't help myself.  Omit it if you want to stick to a more authentic recipe. I also threw in some leftover cherry tomatoes, but did not include this in the recipe because they are not necessary. This meal is traditionally served on pasta or polenta, but we chose to serve it on brown rice.  It adds a nutty flavour and doesn't bloat me up like a balloon like pasta does.

I made this in big batch style on a Sunday night to serve both of us for three to four week nights (depending on serving size), but just halve the recipe if you don't want to make such a big batch.  Alternatively just freeze the leftovers.

For a gluten free option, either substitute the flour with almond/coconut flour, or omit this step and simply mix some gluten free corn flour with water and pour this in after the tomatoes as a thickener.
Other spins: Slow cook this rather than cooking it on a stove top.  The longer this meal cooks, the more flavoursome it is.  If you are short on time, then just bring it to the boil and simmer it with the lid off until thickened to speed it up - this will halve the cooking time, but at the expense of less flavour development.  Swap out the chicken for another white meat, or even use a whole chicken in there for a real hunter's style.  Swap the pancetta for bacon or proscuitto, or else leave it out altogether.  Swap the basil for rosemary, sage and/or thyme for a different flavour.  Swap to Red wine for a Southern Italian flavour - it will taste totally different this way.  Skip the miropoix and just start with the onion.  Or get creative and spin it another way I haven't thought of....how long is a piece of string?

This lasted us for four nights. It meant just heating it up after the gym rather than cooking each night which was great. The flavours infused more with each progressive night.  We actually liked it best on brown rice (surprisingly) because of the nutty flavour element that it added.  We made a big batch of brown rice to last a few days to save on time as well.  I am keen to try this with red wine and sage or rosemary next time.  Enjoy!
Posted by Bunny at 19:16