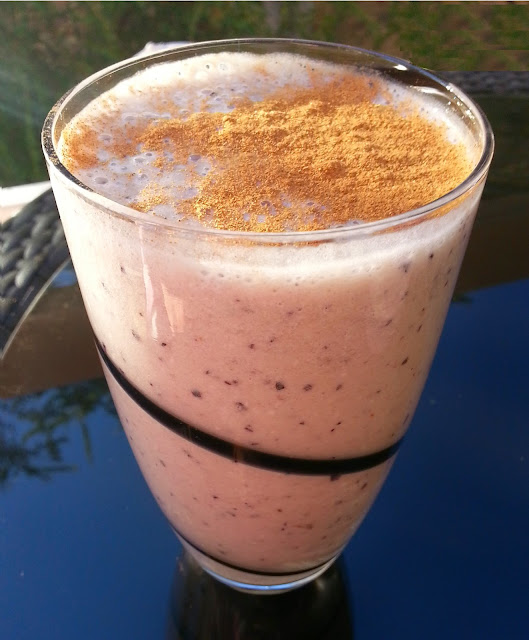 Years ago when I was at university I used to work at an overpriced milkshake, smoothie and cake booth.  One of our more popular smoothies was banana, blueberry and coconut.  We would use a banana, a scoop of frozen berries, two big scoops of ice cream, a scoop of milk and a squirt of coconut milkshake flavouring.  It was incredibly tasty but bad for the waistline.

I wanted to make my own healthier, lower fat/sugar content version to enjoy at home.  Here is a regular contender for a Saturday morning at our place.

Any smoothie can be adapted an unlimited number of ways, so I won't go too crazy - you have your own imagination to use.  But alternatives I would do with this particular recipe include adding either vanilla or unflavoured whey protein powder, substituting vanilla sugar for cinnamon on top, using (a bit more) frozen berries as the ice instead of fresh ones with ice, and/or adding a frozen spinach cube to the mix (sounds crazy I know, and it will go green but you won't taste it so it is just free nutrients!).  Some people also like to freeze the bananas instead of using ice, since it can make it quite smooth.

We enjoyed these on a relaxed Saturday morning on the balcony with a cup of coffee each.  It was filling, healthy and lovely despite not using any ice cream or added sugars.  The banana, berries and coconut each bring a sweetness of their own, as well as a bunch of nutrients. I've made this quite a few times now and I think it will keep making appearances in my kitchen over time.  You can play with the milk/ice ratio to make it thicker or thinner, depending on your preference.  If you use a yonana this may be a good base recipe as well!
Posted by Bunny at 16:53