Meatzza! - It's pizza made of meat. 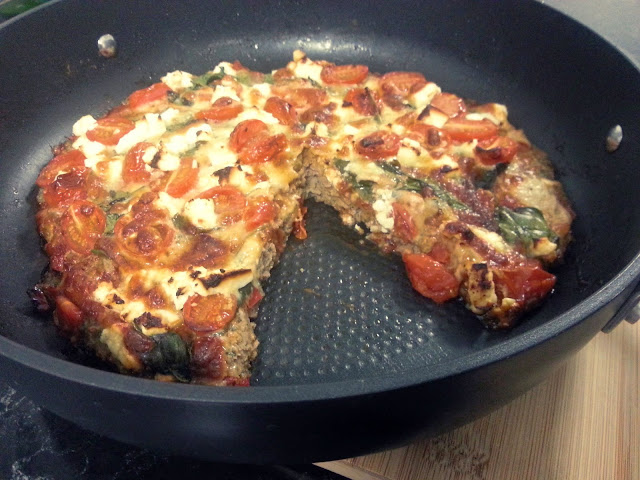 So... Meatzza.  You might have guessed that this is a Dragon special already. This is one of the meals I have discovered recently and decided to try out my own version of ;) This is our version of spiced lamb meattza.

I like the idea of what is essentially a lower carbohydrate version of one of my favourite (but less viable to consume nowadays) meals.  I believe the idea is sound, however upon reflection after making this I have decided that it's essentially a giant rissole that was squished before you put it in the oven.  Still! It is a cool idea and was tasty.


You could definitely change up the vegetables for this by adding more or swapping out for different ones.  Next time I make this I am definitely adding a diced onion to the mix just to give it that outdoor BBQ edge.  If you're inclined you could use BBQ sauce instead of the tomato paste (I'm not a fan myself though).  Additionally you could make it spicier by adding chilli flakes to the mix or adding some Worcester sauce for a fuller flavour.  If this is still not enough meat for you, then you could add chorizo/salami or bacon on top.


You will need a pan which can go on both the stove top and in the oven for this recipe (eg a frypan which is designed to withstand oven temperatures, or a reasonable sized cast iron pot).  If you don't have something like this, then cook it for longer on the fry pan and use your two biggest spatulas at once to move it onto a pizza stone or whatever you would usually cook pizzas on.

Delicious!  Wasn't sure if it would work but it turned out quite lovely.  It has lower carbohydrates than a normal pizza (nutrition warning not the lowest in fat content) and is easy to prepare.  The smell filled our home while it was cooking.  It IS essentially a giant rissole with sauce over the top of it.  So you could modify the recipe as such and just make lots of little rissole balls instead.  It was fun, interesting and would most likely astonish and surprise any friends you have over when you serve it up.

What fun pizza spins have you come up with when making pizza at home?
Posted by Bunny at 20:38